Every society has a mental map or world view of how man (male and female) relates to the cosmos and the Gikuyu are no different. I doubt there exists a people anywhere on earth without such a map or worldview. Here I conceptualize the ideal Gikuyu map supporting at all levels the three basic needs of man. This is the three legged stool (masculine) or the fireplace with three stones  supporting the “pot of wholeness” (feminine)or . The three stones must uphold all the levels of “Adequatio” (food, health and shelter), and are summarised thus in Gikuyu Organization:

If we look at the picture on the right we will see that the woman is making her porridge on a hearth of three stones and the man is sitting on a three legged stool representing the three basic needs. One begins to trace the needs of the individual from the center and incorporates a widening sphere of needs all interlinked and held together as a whole much like a spiders web. This is the web of life. (read the story behind the picture)

The entire spiral construction starts from a navel and continues to infinity. It is much like the fiber basket the south African girl is holding on her head. 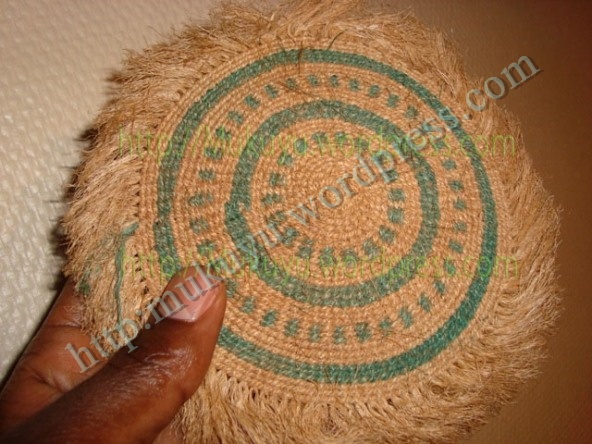 Examined closely, it is seen that the quintessential spiral of the Gikuyu is their basket, the ‘kiondo’ which is basically a spiral woven together with radiating strings from a navel and forming into a self supporting container basket. The kiondo is also much more powerful symbolically because traditionally it was arranged as stages, (matiina) which were clearly marked and divided with stripes. In the mat shown above a continuous green strip alternates with a dashed one in a cosmic harmony reminiscent of the Yin and Yang of Chinese cosmology. In the I-Ching the masculine Yang is denoted as a continuous line and the feminine Yin as a line with a gap in the middle. The stages also marked the path of  life from birth (navel) to death (gutiriha) which will be discussed in detail in another post. Each stage, (itina) requiring a strip or initiation before the next stage.

The Kiondo as a spiral weave construction is a happy marriage between the feminine weft (rurigi), holding the uprights masculine warp (mirugamo), into a firm singular shape symbolizing the wholeness of the web of life. This is what I call, “The Gikuyu Kiondo Kosmology” or “The Architecture of Gikuyu Thought”.

Borobudur Buddhist temple in Java: One of the most fantastic cosmic kiondos ever constructed. See this documentary video

A reconstruction of Borobudur in an artist’s mind’s eye. Borobudur combines the ideas of the spiral as in the Gikuyu kiondo, the sacred mountain of God like Mt. Kenya, Mt Sinai, Mt Meru etc., and the sacred tree at the centre linking Heaven and earth (Axis Mundi). Such trees are like the Gikuyu Mugumo, the Norse Yggdrasill, the Christian Tree of Knowledge of good and evil etc. The Kiondo has all these symbols embed in it. It is probably the most powerful document among the Gikuyu people and codifies Gikuyu cosmology in a text much like the Maya Calender stone below.

The Gikuyu Gicukia Dance where young men and women holding each other like weft and warp enact the dance of life around a Mukuyu tree or Axis Mundi. This photograph was taken by father C. Cagnolo of the Catholic Mission of the Consolata Fathers at around 1910.